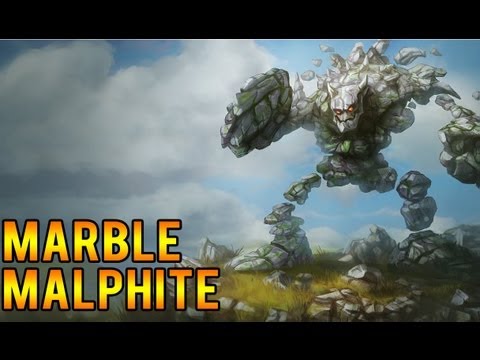 There is a world of perfect harmony, where all are part of the whole. The Monolith is the essence of all creation, and its denizens are but singular pieces of it. It is beautiful in its symmetry, and in its almost complete lack of uncertainty. The rocky beings that live there know their place and work to fulfill their duties to the fullest extent, functioning almost as a superorganism or hive. Malphite has always strived to live up to his full potential, as his own personal part of the whole, serving the role of a distinguished creature questing to enforce his people’s flawless vision of order.

One day, without warning, a dimensional rift opened, and he was summoned across the cosmos to the world of Runeterra. The transition was painful and terrifying for him, as he was cut off from the song of his people and the Monolith – things that had been ever-present in him since the day he was born. He raged, trapped in the Summoning Circle, as those who had called him made their plea. Runeterra was a world that had nearly been consumed by its disharmony. It was a world that needed champions to bring order out of chaos. It was to that end that the rock-creature was summoned, so that he could aid them in this quest. Looking past his own fear and apprehension, Malphite could see that this was a respectable goal, and one in which he could participate – perhaps uniquely so. Today, as part of the League of Legends, he hammers those who would seek to upset Valoran’s movement toward order, especially turning his attention to those that wield chaotic magic. Unfortunately, Malphite has also begun to change, as he has been forced to face his own profound loneliness among the world’s vibrant individuality.

Beware, minions of chaos! The Shard of the Monolith has come.